Dachau Concentration Camp, September 2
[Amanda] Sorry it has been a while since we have blogged. We have been out of Internet range, so now we are submitting another blog today as we wait for our flight back to DFW. We have a 5 hr. layover here. So plenty of time to catch up on a few blogs. :-)

We arrived in Munich, Germany on Tuesday evening after leaving Berchtesgarden. On Wednesday we decided to take a tour of The Dachau Concentration Camp which was promoted by the hostel we stayed at. We got some food for the trip at the train station in a hurry, then met up with the group to leave. Our tour guide, Gordon, took care of all our tickets and we just paid our money for the entire tour. It was nice not having to figure out the bus and train schedule to Dachau as well as when the tours began once we arrived at the Memorial site.

Gordon explained to us that the only people who are allowed to give the tours are certified by the Dachau committee. Upon arriving, we walked along a gravel laid walking area with several new trees planted to hide the Bavarian Riot Police Headquarters, which are now in the former SS training buildings. They have also built a library there as well, which was off to the left. Then we walked down the road where the prisoners were initially lead into the camp, by foot. When I came here in 1996, this was not visible. Instead, we entered the camp through a side gate, by a guard tower. These changes along with the museum's presentations reflect the committee's ideas of being more focused on the prisoners and survivors, rather than the process of the prisoners, with the focus on the SS guards.


As we are standing outside the gate, it reads, "Arbeit macht frei", which means, work brings freedom. This was an ironic statement, as many who came here never saw their freedom again. Some did, moved away, and immigrated to a new country to begin a new life and start over. The reason Dachau is such a well-known name is because it was one of the first camps that was set up and later became the model camp for many, countless other camps and subcamps throughout Europe. 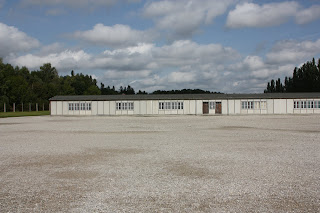 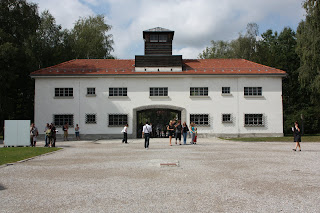 We also learned from Gordon that the gas chambers at Dachau were used on prisoners who were transported there from other camps. Those who were at Dachau were never put in the gas chamber there, only those who arrived at Dachau from other camps. The prisoners were constantly on the move. The creamatoriums were used so much that the original three were not enough for the many prisoners, so another, more efficient one was built. These burned at much higher temperatures. There were also spies who were hung on the rafters and then burned in the ovens. 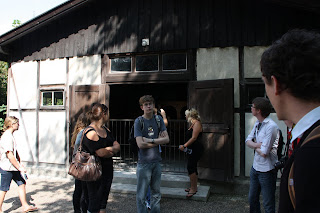 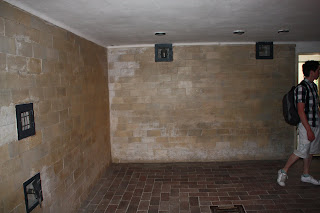 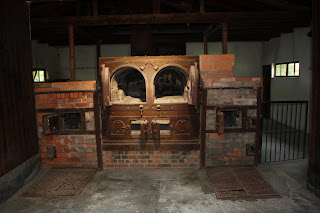 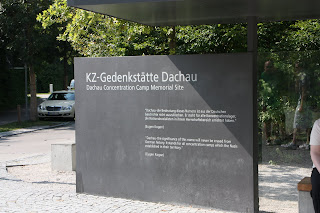 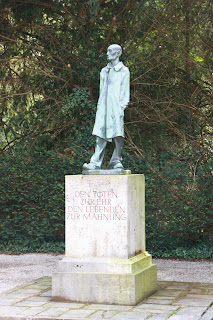